The box is for display purposes only and is empty. Contains no food product. 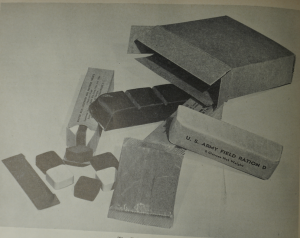 Originally, the USAAF ordered its own “Special Air Corps Ration” without the Quartermaster Corps approval. Throughout the summer and fall of 1942, research on a new bailout ration continued but despite the research in progress, the Bailout Ration’s QMC specification was largely based on the original AAF order.

Substitutions were suggested in late 1942 to include a fruit bar, hard candy and lemon juice powder, as well as adding a pack of K-ration type biscuits.  It’s unclear if these changes were executed or how they fit into the existing bailout ration slot in the parachute emergency kit. The bailout ration was in production well into 1943. It cost the AAF .149 cents per ration to produce.

The Bailout ration as a ration was ultimately replaced with the Parachute Emergency Ration tin, while some of its components would be relocated to the E-3 emergency flask.

The box is for display purposes only. Contains no food product.