SHH. It’s a military secret: Condoms from WWI to WWII 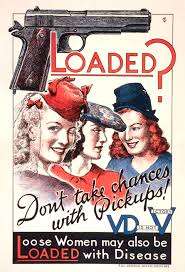 The Comstock Act of 1873 considered condoms obscene and illicit and made it a federal offense to advertise, distribute across state lines, or mail any contraceptive devices. Some states upped the ante, making it illegal to even talk about the illicit items. Although products were sometimes advertised as “gentleman’s rubbers” or simply “sheath,” the condom went underground for almost 50 years.

The pre-WWI military was aware of the issues of VD amongst soldiers but struggled to control it. The use of pro-kits – two tubes of ointment to be applied after the fact – was somewhat controversial. The Navy, for example, felt that the pro-kits encouraged sailors to have a good time while in port. Instead, early efforts urged soldiers to save their strength for fighting and not for “sins of the flesh.”

However, upon the GI’s arrival in France, Pershing passed General Order #6. The 1917 order established that soldiers must report to a prophylactic station within 3 hours. The order also made VD punishable by court-martial.

Europe had been purchasing rubbers from Germany before the war. When WWI broke out, a few American rubber companies began supplying France and England with condoms despite their illegality in the US. The US Army and Navy, on the other hand, shunned stateside manufacturers, informing them that rubber was needed for more essential manufacturing purposes. In truth, the American military hampered by the Comstock law.

Somewhat ironically, soldiers were able to purchase the “European” rubbers in many American canteens. The Doughboys learned about them from their European girlfriends and call girls, who were well-versed in their use.

By 1918, the Comstock law was overturned. Returning veterans were quick to teach their newfound knowledge to any woman who was willing to learn. Condom companies grew exponentially with Youngs Rubber (Trojan) and Fuorex (Rameses and Sheik) dominating the marketplace. Other, cheaper imitations popped up. To combat lesser competitors, Trojan advertised that it was the one condom sold exclusively in drug stores. Trojan also boasted that their condoms were tested and effective while implying that other condoms were not.

It took until 1938 for the FDA to require any sort of reliability testing. Textide and Silverpak condoms had almost a 94% fail rate. Since the FDA did not regulate imports, batches of faulty condoms were dumped onto the European market.

Accepting the reality that angels “rightfully belong only in heaven,” both the Army and Navy began issuing condoms in the 1930s.

In the early days of WWII, Europe quickly adopted the adage of living for the day while bombs rained nightly, and food and supplies grew short. For those in Europe, condoms were already a mainstay during the First World War.

Soon enough, the American GI’s arrived on the scene, biding time until the invasion and craving the comforts of home. It’s no surprise that the rate of widowed and unwed mothers skyrocketed as soldiers shipped out to destinations unknown.

Pro-kits continued to be a GI staple, but the application burned and wasn’t very effective. Commercial pro-kits now included condoms and could be purchased not only at PXs, but were placed in vending machines as well. The Army went one step further and allowed individual units to distribute free condoms and pro-kits purchased with company funds.

An early military study showed the process to be effective. During a 6 month study at Ft. Belvoir in Virginia, soldiers purchased 5,400 condoms, applied 262 ointment kits and only had 9 cases of VD. The proof was in the pudding. Condoms worked.

Devices and Desires: A History of Contraceptives in America – Andrea Tone

What Soldiers Do: Sex and the American GI in WWII France – Mary Louise Roberts