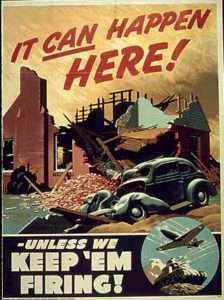 Part of WWII Soldier’s business model is to produce historically accurate props and reproductions for museums, living history, and theatrical productions.  We believe that the best way to learn from history is to see it and experience it.  In order for these experiences to be complete, both sides of the war must be represented.

The Second World War was a horrifying experience for millions around the globe who suffered from oppression, mass murder, and genocide. Millions of soldiers and civilians of all walks of life became casualties. We believe one of the purest ways to pay respect to those who sacrificed, suffered, and died is to accurately and completely represent the history of this era.

In order to produce a historically accurate product, we do recreate the correct German / Nazi markings, as well as German, British, and American propaganda pieces in their original form.  These items are produced for educational and historical re-creation purposes.

We are not a neo-nazi organization, nor do we subscribe to the ideas, ideals, goals, or aspirations of any extremist groups, nor are we affiliated with any such organizations.